Earlier today,  Zachary Petrizzo, a so-called “reporter” for The College Fix sent me this note. I know what Zach is up to: he’s trying to start a new round of stochastic terrorism. Unbeknownst to him, I’ve been waiting for someone like him to take the bait. He is seeking to begin a new cycle of stochastic terrorism, which is the subject of my next big research project.

[Translation: The Hunted becomes the Hunter]

Good afternoon. I hope that this email finds you well. I wanted to reach out and see if I could get a comment for a story I am writing regarding what you meant in this tweet about “Fox News” “being terrorists.” (https://twitter.com/CChristineFair/status/1056435487496458245)
I appreciate your time in advance for your comment.
Best,
Zachary Petrizzo
Reporter, The College Fix 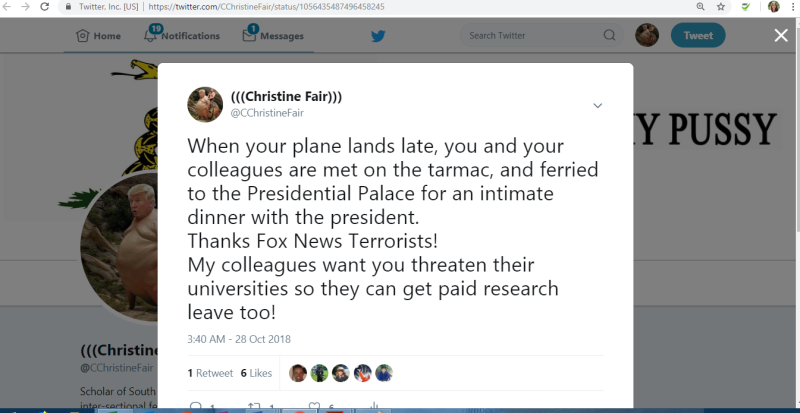 Greetings from Kabul.  That was one of the rare occasions on which  I used the expression “Fox News.” Typically, I do not place the word “fox” before “news” unless I literally intend to describe current information on the Vulpes genus of the Canidae family.

Since my hand is broken and is in a cast, it is difficult to write on my small travel keyboard. Apologies for typos etc.

The fascination with me in particular borders on the pathological. I suspect your “editor” has tasked you with “monitoring” me. You know exactly what you are doing as do I. For this reason, I am looping in my Dean  as well as the chief of security such that they too are aware of these brewing shenanigans.  One of the hallmarks of stochastic terrorism is the focus upon a specific person (in this case me) or a group of persons (Jews, people of color, LGBTQI, Muslims, immigrants fleeing the destruction of their countries wrought by decades of necrotic US foreign policy, etc.)

For your edification, “stochastic terrorism” is the use of mass communications to incite random actors to carry out violent or terrorist acts or threaten to do so. These acts of violence or threats of violence  are statistically predictable but individually unpredictable.  One blogger defined this as “remote-control murder by lone wolf.” Examples include the thousands of threats sent to me and my community; the pipe bombs sent to democratic leaders and opinion-leaders, as well as the slaughter of eleven Jews in their synagogue.

As you know, your news outlet is on the lower tiers of the stochastic terrorism pyramid.  Your outlet’s entire Twitter following is a mere 13.2K followers. In contrast, this lowly professor has some 35.5K followers. By writing this article, your aim is not to inform your readership about stochastic terrorism; rather to sow outrage that some “liberal professor [who studies terrorism by the way] has the temerity to call Faux Noise a mobilizer of stochastic terrorism.” Your disinterest in truth was revealed in your last piece when you claimed I called a German police officer a Nazi. For your information, that case went nowhere as I did not do this as this corrupt cop claims. I own my words. Never have I backed down from my own verbiage.

Returning to the stochastic terrorism which you are seeking to galvanize. Your outlet cannot do it on a massive scale because it lacks the dedicated following of fanatical cadre. Your article will precipitate in a mere handful of goons (who already despise me for my egalitarian politics) sending me and my community vile, racist, misogynist, x-phobic bigoted missives. By focusing on a personality such as myself who boldly challenges the contemporary white, Christian, cis-male supremacist agenda, your outlet hopes that a more powerful outlet picks it your “story.” If you’re lucky, it will go to Faux Noise directly. You may have to pimp it out to Daily Failer or the equivalent before it makes its way to Faux News. Once an “outrage entrepreneur” such as Pucker Carlson, Laura Ingrate or Lou Knobs picks this up, the loyal following will do the needful. From here it will travel to more odious outlets and onto the dark web.

Note that the conservative muckrakers are not the only ones who mobilize stochastic terrorists. Glenn Greenwald and Al Jazeera’s Mehdi Hassan dispatched stochastic terrorists my way because of my data-driven support for the US drone program in Pakistan. My view continues to garner support of other scholars, by the way. However, the followers of Messers Greenwald and Hassan literally lack the fire power of those of Fox Noise. While their followers sent deeply gendered missives they rarely rose to the quality of suggested and threatened violence as those of Fox Noise. 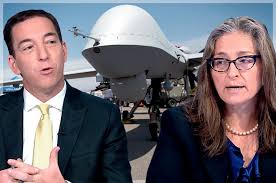 My students are amused at the rightwing nut characterization of me as they know my security credentials. One of my former students is a Marine colonel and he gets a kick out of this. He knows better.

By the way, I have exciting news: you and your fellow travelers will be the subject of my next book. I have thousands of such missives that can be chronologically correlated with specific time-points in the stochastic terrorism cycle of which I have endured several. Few scholars are in my position with a data set of this size spanning several cycles. In fact, YOUR article is going to be another natural experiment. I will be monitoring how far up the stochastic terrorism pyramid it moves and with what consequences. So this is exciting, isn’t it? YOU will the beginning point of this cycle.

At some point, I am going to have to interview you (among others) and I hope you will oblige.

It will likely be a trade book and it will sell given the growing interest in stochastic terrorism. So, I thank you and your fellow travelers for this research leave and for the fodder of my next major research effort now that my book on LeT is in production. (Would you like to review it by the way? It’s a page turner, I assure you.)  It is coming out in the United States and elsewhere under Oxford University Press (https://global.oup.com/academic/product/in-their-own-words-9780190909482?cc=us&lang=en&).

In closing, you and your ilk have literal blood on your hands. How you sleep at night baffles me. You’re young. There is no reason to follow this career trajectory. You can still pivot to legitimate journalism, though it is pilloried as “fake news” by the white supremacist running and ruining this country. Consider enrolling in a journalism program which will afford you the opportunity to engage the subject of ethics and will afford you the opportunity to alter the trajectory of your “career.” I say this not out of animus. You are simply doing your job. But is participating in stochastic terrorism the “job” you want?

I believe I have addressed this issue comprehensively.

Back to my research.  If you ever want to do a real interview on actual substance, I’d be happy to share with you my work on Afghanistan or other parts of South Asia.

As usual, this missive will be a blog post by the time you get it.